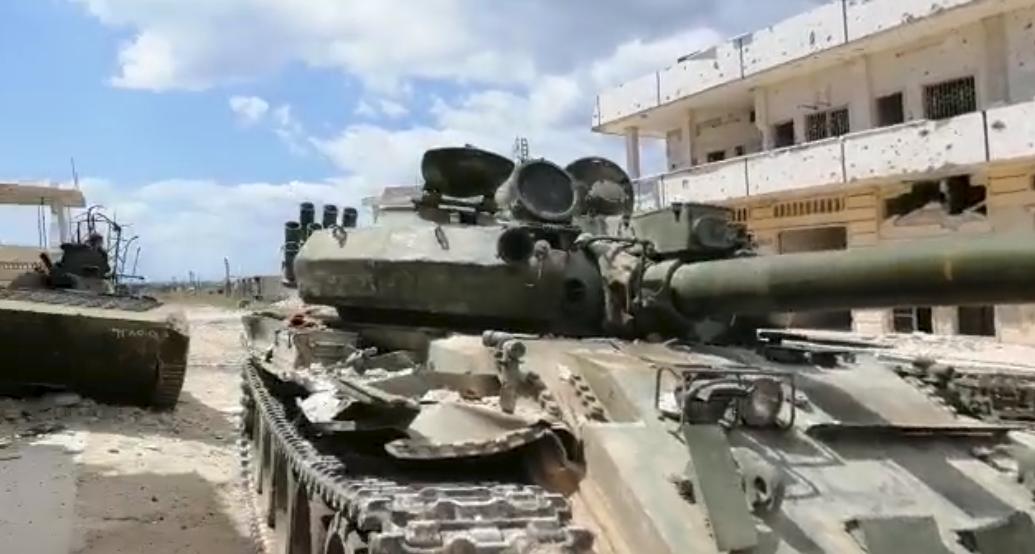 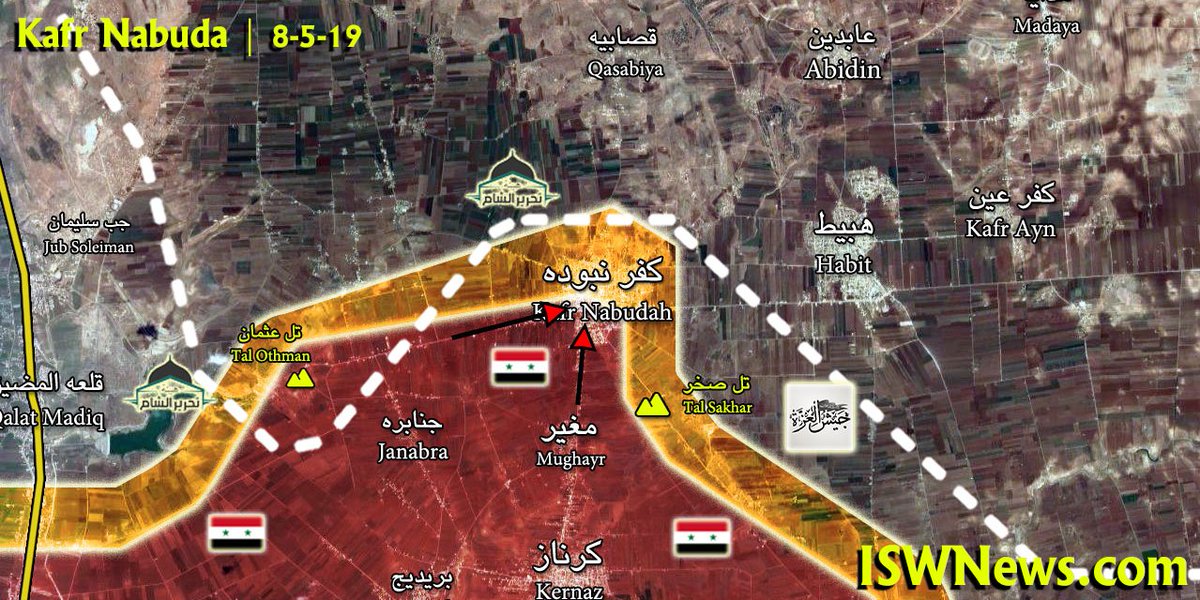 By the evening of May 8, the Al-Nusra militants also began to confirm the loss of Kafr-Nabudah.

Despite strong counterattacks, it was not possible to knock out the SAA from the city. The reasons for the failure are very strong air strikes by the Syrian Air Force and the Russian Aerospace Forces, which hampered the militants’ ability to pull reserves to the city.
Due to the loss of Kafar Nabudah and the Tal Uthman hill, the operational crisis in southwestern Idlib is growing. Pro-terrorist sources by the evening became full of pessimism and broadcast about signs of a collapse of the defense in south-western Idlib, calling on the West to intervene.

According to the militants, they suffered significant losses in the Al-Habit area (a village east of Kafr-Nabudah) as a result of massive air strikes. Militants suggest that the Russian Aerospace Forces and the Syrian Air Force are paving the way to Khan-Shaykhun, which poses a threat to the thousands of militant groups defending the Al-Lataminah ledge. Tomorrow another mobilization and counterattack was announced, with the aim of stopping the advance of the SAA and forging the strike parts of the Tigers with counter-fighting at Kafr-Nabuda (or, if possible, returning the city) in order to prevent them from moving to Khan-Shaykhun through Al-Habit. By evening, reinforcements had advanced from the Khan-Shaykhun and central Idlib to the menacing site, including well-trained militant units with street fighting experience. On the other hand, while maintaining the intensity of the work of aviation, counterattacks of militants will obviously be associated with large losses, especially when moving during the daytime.

The propaganda of “Al-Nusra” in parallel spins up the standard narrative about the “destruction of hospitals”. This topic is gradually picked up by the Western press, confirming the close connection of terrorists in Syria and Western media. It is expected that international pressure on Syria and Russia in the coming days will increase, primarily from the United States. It is also worth noting that Julian Röpke joined the battle to protect the “Idlib hospitals”.

An emergency meeting of the UN Security Council was convened, where the US and Co.  will try to save Al-Nusra from further beatings.

Turkey takes a more restrained position by withdrawing a part of its observers from the Al-Gab plain, which seems to hint that the territory to the west of Kafar-Nabud can also become the target of the Syrian army.

It is worth noting that in Latakia, the SAA is also trying to advance in the Kabana area, squeezing militants from significant heights. The offensive is led by the 4th Panzer Division.

I would not rule out that the Russian Federation and Turkey entered into a tacit agreement, under which Syria, with the support of Russia, will occupy some territories of northeastern Latakia, northern Hama and possibly south-western Idlib, from where systematic UAV raids are carried out at Hmeimim airbase.

Lavrov has already stated that “the nest of terrorists must be cleaned out.” The attacks on Hamim could well become an iron argument, after which Erdogan could no longer block the start of the offensive.

It is unlikely that this is a complete surrender of Idlib by Turkey, rather it is a limited operation, within which the SAA will release a few more pieces of Syrian territory from Al-Nusra and its . A limited offensive will reduce Damascus’s dissatisfaction, secure Hamime, and increase Turkey’s capacity in idlib affairs, although of course Turkey already now has to face Islamist accusations that it has again concluded a deal with Russia and exchanged militants in south-western Idlib within next contract Is it so – we will see the depth of the advance of the Syrian army in Idlib and North Hama.

It is unlikely we are talking about the complete surrender of Turkey Idlib, rather we are talking about a limited operation, in which the SAA will release a few pieces of the Syrian territory and thin out “An-Nusra” and affiliated groups. The limited offensive at a time will reduce the dissatisfaction of Damascus and will protect Khmeimim, as well as increase Turkey’s capacity in Iglinsky cases, although of course now Turkey has to face the accusations of the Islamists that it has again signed a deal with Russia and exchanged militants in the South-Western Idlib within the next fixed. So it will see the depth of advancement of the Syrian army in Idlib and Northern Hama.

Significant advances by regime forces in northern Hama today. This is prompting conspiracy theories about "surrender", "sale" of areas by the rebels to the regime, further damaging the (already poor) reputation of the rebels among civilians in rebel-held Syria pic.twitter.com/LtMOTD9SLP

This morning the defense of fighters in North Hama notably cracked. Qalat-al-Madiq and settlement Kirkat were liberated.

Syrian sources note the low level of resistance fighters and their demoralization. The battalion fighters defending Qalat-al-Madiq fled without much of a fight.

It is possible that the militants were forced to accept the position of Turkey and forced to withdraw to a certain line in Idlib that was agreed between Russia and Turkey. Most likely we will see a further release of the remaining territories of the provinces of Hama and Latakia in the coming weeks.

But the main thing is yet to come – Al-Lataminah ledge.

Intermediate results of the May offensive. Tomorrow is expected to advance on the plain of Al-Ghab, as well as an attempt to advance to Al-Habit, the capture of which opens the road to Khan-Shaykhun .

Al-Nusra will have to try very hard to stabilize the collapsed front, especially given that their positions in the depth have also been bombed and there are serious problems with maneuvering reserves in the daytime.

Tonight, the situation in a closed mode will be discussed by the UN Security Council, where they will try to put pressure on Russia to stop the offensive. Turkey is apparently holding back its controlled groups from the battle in North Hama, leaving Al-Nusra and Co. to independently fight for “democracy in Syria.” In the case that Turkey will not interfere, the outcome of battles in Northern Hama is a little predictable – sort of like the one with Abu Dahkur.

Ps. It is worth noting that Syrian sources report that the Syrians successfully ambushed a group of 40 Uygur militants and crumbled it notably. If so, then China will be clearly pleased. We are waiting for the photo.