The Japanese government has been requesting the United States for concrete evidence to back its assertion that Iran is to blame for the attacks on two tankers near the Strait of Hormuz on Thursday, government sources said Sunday.

The Japanese operator ship operator of one of two oil tankers attacked near the Strait of Hormuz on Thursday said that sailors on board its vessel, the Kokuka Courageous, saw “flying objects” just before the attack, suggesting the tanker wasn’t damaged by mines.

That account contradicts what the U.S. military has said as it released a video it says shows Iranian forces removing an unexploded limpet mine from one of the two ships in the suspected attack.

Speaking at a news conference in Tokyo, Yutaka Katada, president of Kokuka Sangyo Co, said he believes the flying objects seen by the sailors could be bullets, and denied possibility of mines or torpedoes because the damages were above the ship’s waterline. He called reports of mine attack “false.”

‘Flying Object’ Struck Tanker in Gulf of Oman, Operator Says, Not a Mine

One of the tankers that were attacked in the Gulf of Oman was struck by a flying object, the ship’s Japanese operator said on Friday, expressing doubt that a mine had been attached to its hull….

But Yutaka Katada, the company’s president, citing accounts from the ship’s crew, said Friday: “I do not think there was a time bomb or an object attached to the side of the ship.”

Mr. Pompeo did not say that mines had caused the two holes in the tanker’s hull that were visible in photographs released by the American military. Senior American officials have said that mines were used in attacks last month on four ships in the same area, which the United States has also accused Iran of carrying out.

“Our crew said that the ship was attacked by a flying object,” Mr. Katada said of the incident on Thursday.

He said that the holes in Kokuka Courageous were well above its waterline. “There is zero possibility that they were torpedoes,” he added.

Blast-hit tankers to be assessed off UAE coast

The two oil tankers crippled in attacks in the Gulf of Oman last week that Washington and Riyadh have blamed on Iran are being assessed off the coast off the United Arab Emirates before their cargos are unloaded, the ships’ operators said on Sunday, Reuters reports.

Damage assessment on Japan’s Kokuka Courageous and preparation for ship-to-ship transfer of its methanol cargo would start after authorities in Sharjah, one of the UAE’s seven emirates, complete security checks, Bernhard Schulte Shipmanagement said.

Thursday’s attacks, which also hit Norwegian tanker Front Altair, have heightened tensions between Iran and the United States and its Gulf allies after similar blasts in May struck four ships, including two Saudi oil tankers, off the UAE.

Foreign minister Jeremy Hunt said on Sunday Britain was “almost certain” Iran was behind attacks, adding that London did not believe anyone else could have done it.

Tehran has denied any involvement in the attacks near the Strait of Hormuz, a major transit route for global oil supplies.

The Front Altair is sitting off the coast of Sharjah’s Khorfakkan port while the Kokuka Courageous is anchored closer to shore off the emirate’s Kalba port, according to Refinitiv Eikon ship tracking data.

“Our crew remain on board the Kokuka Courageous. They are safe and well,” Bernhard Schulte said in a statement.

The Kokuka Courageous’s 21 crew members were returned to the vessel by the US Navy’s Bahrain-based Fifth Fleet after being rescued.

The crew of the Front Altair, who had been picked up by Iranian boats, departed Iran from Bandar Abbas airport to Dubai International Airport on Saturday, the ship’s operator Frontline said.

A specialist team will inspect the Front Altair before deciding on how to unload its naphtha cargo. Frontline said on Sunday there had been no reported marine pollution.

The ship is now being towed towards the offshore part of Fujairah emirate, the company said.

The Japanese government has been requesting the United States for concrete evidence to back its assertion that Iran is to blame for the attacks on two tankers near the Strait of Hormuz on Thursday, government sources said Sunday.

The request came after U.S. Secretary of State Mike Pompeo gave a statement hours after the attacks blaming Iran but without offering proof. The Department of Defense later released a video allegedly showing an Iranian patrol boat removing an unexploded mine attached to the side of the Japanese-operated tanker Kokuka Courageous.

Japan has been seeking more concrete evidence through various channels, including Foreign Minister Taro Kono who is likely to have made the request during a call with his counterpart on Friday, the sources said.

Pompeo said in a press conference Thursday that the United States’ assessment was based on their “intelligence, the weapons used, the level of expertise needed to execute the operation, recent similar Iranian attacks on shipping, and the fact that no proxy group operating in the area has the resources and proficiency to act with such a high degree of sophistication.”

A source close to Prime Minister Shinzo Abe said, “These are not definite proof that it’s Iran.”

“Even if it’s the United States that makes the assertion, we cannot simply say we believe it,” he said.

If having expertise sophisticated enough to conduct the attack could be a reason to conclude that the attacker was Iran, “That would apply to the United States and Israel as well,” said a source at the Foreign Ministry.

The attacks occurred around the time Abe was meeting with Iranian Supreme Leader Ayatollah Ali Khamenei in Tehran.

“The attacks have severely affected the prime minister’s reputation as he was trying to be a mediator between the United States and Iran,” said the source close to the premier. “It is a serious concern, and making mistakes when determining facts is impermissible.”

The Japanese government has refrained so far from commenting on who is responsible for the attacks.

Two “flying objects” damaged a Japanese tanker owned by Kokuka Sangyo Co in an attack on Thursday in the Gulf of Oman, but there was no damage to the cargo of methanol, the company president said on Friday.

The Kokuka Courageous is now sailing toward the port of Khor Fakkan in the United Arab Emirates, with the crew having returned to the ship after evacuating because of the incident, Kokuka President Yutaka Katada told a press conference. It was being escorted by the U.S. Navy, he said.

“The crew told us something came flying at the ship, and they found a hole,” Katada said. “Then some crew witnessed the second shot.”

Katada said there was no possibility that the ship, carrying 25,000 tons of methanol, was hit by a torpedo.

The United States has blamed Iran for attacking the Kokuka Courageous and another tanker, the Norwegian-owned Front Altair, on Thursday, but Tehran has denied the allegations.

The Japanese owner of a tanker attacked in the Gulf of Oman claimed Friday that it was struck by a flying projectile, contradicting reports by U.S. officials and the military on the source of the blast.

U.S. Central Command said the two vessels were hit Thursday by a limpet mine, which is attached to boats below the waterline using magnets. U.S. Central Command released video it claimed showed an Iranian Revolutionary Guard Corps patrol boat removing an unexploded mine from one of the tankers, the Kokuka Courageous.

But on Friday morning, the owner of the 560-foot Courageous, said that sailors saw something flying toward the vessel just before the explosion and that the impact was well above the waterline.

“We received reports that something flew towards the ship,” said Yutaka Katada, president of Kokaku Sangyo Co. at a press conference. “The place where the projectile landed was significantly higher than the water level, so we are absolutely sure that this wasn’t a torpedo.

“I do not think there was a time bomb or an object attached to the side of the ship.”

U.S. officials have not yet responded to the claims. But President Donald Trump reiterated U.S. allegations that Iran was behind the attack, telling the Fox News Channel that the incident had “Iran written all over it.”

“It is very important to know the truth,” Guterres told reporters at the UN’s New York headquarters. “Obviously, that can only be done if there is some independent entity that verifies those facts. So, whatever happens in the international community, we will be supportive of any initiative in this regard, provided it is truly independent.”

Tasnim’s Photos, Videos of Rescue Operation after Tankers’ Incidents in Gulf of Oman

Front Altair was carrying 75,000 tons of naphtha, a petrochemical feedstock, according to Taiwan’s state oil refiner CPC, which chartered the vessel. The vessel was on fire but afloat.

The Kokuka Courageous was damaged in an incident that breached the hull above the waterline while en route from Saudi Arabia to Singapore. The ship is safely afloat

Hormozgan Maritime Search and Rescue Centre in Southern Iran has managed to evacuate the crew of the two large oil tankers hit by two successive blasts in the Sea of Oman on Thursday morning. 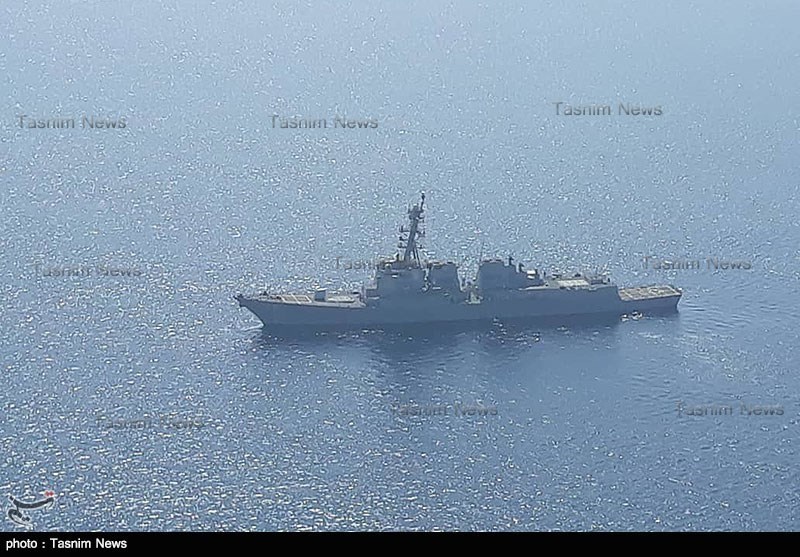 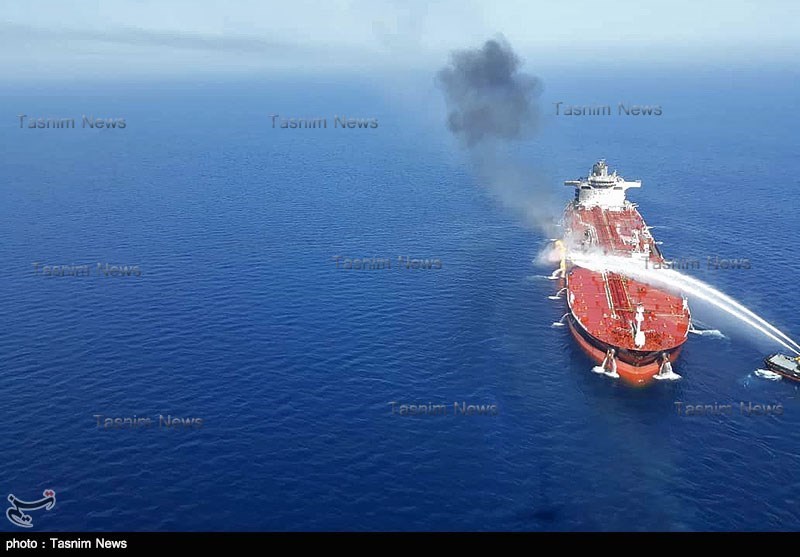 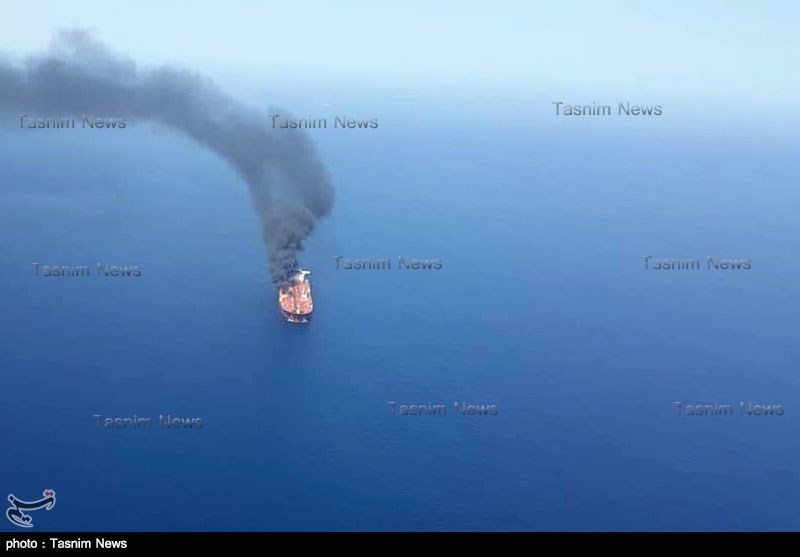 US video not enough to blame Iran for tanker attacks: Germany

Video footage released by the US military to blame Iran for the recent attacks on two oil tankers in the Sea of Oman has been disputed even by Washington’s allies and Western analysts.

Less than a day after the US Central Command (CENTCOM) released the video late Thursday purportedly showing “Iranian sailors” removing a mine from the Japanese-owned Kokura Courageous’ hull earlier in the day, European governments — except for Britain — have so far refused to accept the US’ narrative that Tehran was to blame for the “suspicious” attacks.

They are reluctant to accept the White House’s claims at face value, and do not want to provide Washington with any pretext for war.

German Foreign Minister Heiko Maas said on Friday the video is not sufficient to prove the US claim that Iran was behind the attacks.

“The video is not enough. We can understand what is being shown, sure, but to make a final assessment, this is not enough for me,” Maas, who was in Iran earlier this week on an official two-day visit, told reporters in Oslo.

Nathalie Tocci, a senior adviser to European foreign policy chief Federica Mogherini also rejected the US allegations, saying, “Before we blame someone, we need credible evidence.”

Iranians are deeply rational actors, she said. And for Iran to have attacked a Japanese ship when the Japanese prime minister was in Tehran “is not an especially rational thing to do.”

Patrick Clawson of the influential neo-con Washington Institute for Near East Studies OPENLY suggests that the US should do this with Iran. Gives historical examples.#NoWarWithIran #HandsOffIran pic.twitter.com/h2bJlb9qIm

That the US immediately jumped to make allegations against Iran—w/o a shred of factual or circumstantial evidence—only makes it abundantly clear that the #B_Team is moving to a #PlanB: Sabotage diplomacy—including by @AbeShinzo—and cover up its #EconomicTerrorism against Iran.

I’ve reviewed 100+ hours of BDA and I can tell you this, the Navy edited this video and it’s now misleading.https://t.co/B3nsBB9e0o