“Operation Deterrent Balance 2 came after a careful intelligence operation and prior monitoring and cooperation from honorable and free people within Saudi Arabia,” Brig. Gen. Yahya Sari said in the statement, warning that “future operations will expand further and be more painful.”

Air Force of the Yemeni Army and Popular Committees, Saturday morning carried out a large-scale operation with 10 drones, targeting Abqaiq and Khurais refineries east of Saudi Arabia. The operation is called the “Second Deterrent Balance Operation”.

The  Armed Forces spokesman Brigadier Yahya Sare’e in a televised statement confirmed that The air force targeted the Abqaiq and Khurais refineries which are affiliated to Aramco in eastern Saudi Arabia.

He confirmed that the operatione hit its target accurately.

Armed Forces spokesman pointed out that targeting Abqaiq and Khurais fields comes within the framework of legitimate response to US-Saudi crimes and siege since 2015.

The scale of the operation is obviously very large. Images of massive fires and heavy smoke at Aramco’s Abqaiq and Khurais oil fields have spread on social media, prompting Saudi authorities to acknowledge the operations.

Abqaiq field is an oil field located in the Eastern Province of Saudi Arabia and includes the largest oil processing facilities in Saudi Arabia, in addition to the largest oil concentration plant in the world. The field has a production capacity of more than 7 million barrels of oil per day.

Khurais oil field in Al-Ahsa is an oil field that began pumping oil in 2009, and the volume of reserves were estimated at 27 billion barrels of oil, an average of 1.2 million barrels per day.

The Khurais field could also produce 315 million cubic feet per day of high sulfur gas and 70,000 barrels per day of natural gas liquids. 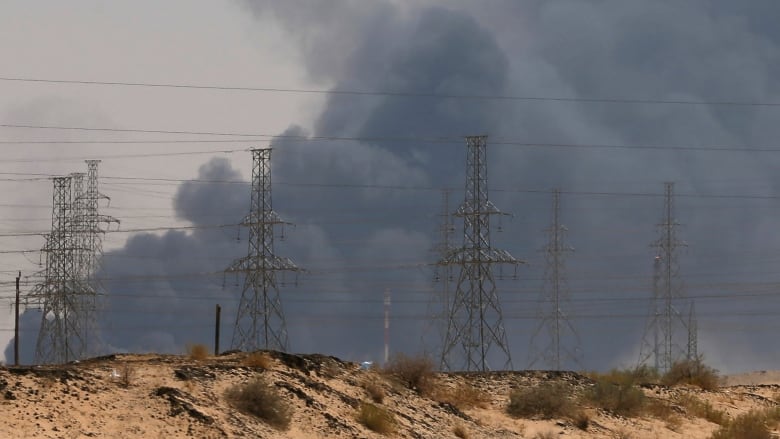 It remained unclear hours later whether anyone was injured at the Abqaiq oil processing facility and the Khurais oil field or what effect the assault would have on oil production. Rising smoke from the fires at the sites could be seen by satellites in space. 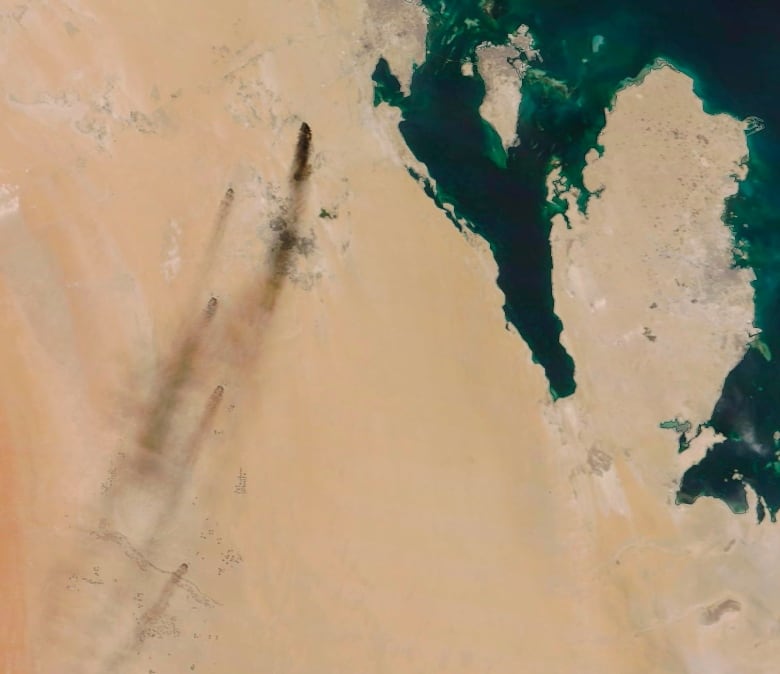 The attack by the Iranian-backed Houthis in the war against a Saudi-led coalition comes after weeks of similar drone assaults on the kingdom’s oil infrastructure, but none of the earlier strikes appeared to have caused the same amount of damage. The attack likely will heighten tensions further across the Persian Gulf amid an escalating crisis between the U.S. and Iran over its unravelling nuclear deal with world powers.

First word of the assault came in online videos of giant fires at the Abqaiq facility, some 330 kilometres northeast of the Saudi capital, Riyadh. Machine-gun fire could be heard in several clips alongside the day’s first Muslim call to prayers, suggesting security forces tried to bring down the drones just before dawn.

In daylight, Saudi state television aired a segment with its local correspondent near a police checkpoint, a thick plume of smoke visible behind him.

The fires began after the sites were “targeted by drones,” the Interior Ministry said in a statement carried by the state-run Saudi Press Agency. It said an investigation was underway.

Saudi Aramco, the state-owned oil giant, did not respond to questions from The Associated Press. The kingdom hopes soon to offer a sliver of the company in an initial public offering.

In a short address aired by the Houthi’s Al-Masirah satellite news channel, military spokesperson Yahia Sarie said the rebels launched 10 drones in their co-ordinated attack after receiving “intelligence” support from those inside the kingdom. He warned that attacks by the rebels would only get worse if the war continues.

“The only option for the Saudi government is to stop attacking us,” Sarie said.

The rebels hold Yemen’s capital, Sanaa, and other territory in the Arab world’s poorest country. Since 2015, a Saudi-led coalition has fought to reinstate the internationally recognized Yemeni government.

The U.S. Embassy in Riyadh said it was unaware of any injuries to Americans. Saudi Aramco employs a number of U.S. citizens, some of whom live in guarded compounds near the site.

Saudi Aramco describes its Abqaiq oil processing facility in Buqyaq as “the largest crude oil stabilization plant in the world.”

The facility processes sour crude oil into sweet crude, then later transports onto transshipment points on the Persian Gulf and the Red Sea. Estimates suggest it can process up to seven million barrels of crude oil a day.

The plant has been targeted in the past by militants. Al-Qaeda-claimed suicide bombers tried but failed to attack the oil complex in February 2006.

No immediate impact on oil prices

There was no immediate impact on global oil prices as markets were closed for the weekend across the world. Benchmark Brent crude had been trading at just above $60 US a barrel.

While Saudi Arabia has taken steps to protect itself and its oil infrastructure, analysts had warned that Abqaiq remained vulnerable. The Rapidan Energy Group, a Washington-based advisory group, warned in May that “a successful attack could lead to a months-long disruption of most Saudi production and nearly all spare production.” It called Abqaiq, close to the eastern Saudi city of Dammam, “the most important oil facility in the world.”

The Washington-based Center for Strategic and International Studies separately issued its own warning just last month.

“Though the Abqaiq facility is large, the stabilization process is concentrated in specific areas — including storage tanks and processing and compressor trains — which greatly increases the likelihood of a strike successfully disrupting or destroying its operations,” the centre said.

The war has become the world’s worst humanitarian crisis. The violence has pushed Yemen to the brink of famine and killed more than 90,000 people since 2015, according to the U.S.-based Armed Conflict Location & Event Data Project, or ACLED, which tracks the conflict.

Since the start of the Saudi-led war, Houthi rebels have been using drones in combat. The first appeared to be off-the-shelf, hobby-kit-style drones. Later, versions nearly identical to Iranian models turned up. Iran denies supplying the Houthis with weapons, although the UN, the West and Gulf Arab nations say Tehran does.

The rebels have flown drones into the radar arrays of Saudi Arabia’s Patriot missile batteries, according to Conflict Armament Research, disabling them and allowing the Houthis to fire ballistic missiles into the kingdom unchallenged. The Houthis launched drone attacks targeting Saudi Arabia’s crucial East-West Pipeline in May as tensions heightened between Iran and the U.S. In August, Houthi drones struck Saudi Arabia’s Shaybah oil field, which produces some 1 million barrels of crude oil a day near its border with the United Arab Emirates.

UN investigators said the Houthis’ new UAV-X drone, found in recent months during the Saudi-led coalition’s war in Yemen, likely has a range of up to 1,500 kilometres.

That puts the far reaches of both Saudi Arabia and the UAE in range.

Saudi Oil Attack: This Is the Big One

ISWNews Analysis Group: Last night, the Yemeni drones carried out a large-scale attacks on the Aramco Oil Facility in Buqayq near Dammam and Hijrah Khurais.
According to local sources, the explosions began at three in the morning and the sound of 12 huge explosions heard in Buqayq.
Although Saudi Arabia’s interior ministry announces the containment of fires, the images released this morning show that the oil facilities are still on fire.

It is worth noting that the Buqayq oil complex in eastern Saudi Arabia is the world’s largest oil processing facility, currently refining about 6.8 million barrels per day.

Ansar Allah’s drone attack on this oil facility which is at least 1000km away from Ansar Allah controlled areas, will have huge impacts on Saudi Arabia’s economic and the continuation of these drone strikes on vital Saudi refineries will change the balance of power, making the future of Yemen’s battles undergo many changes.

In the name of of Allah the Merciful

The Almighty said: (Whoever attacked you, assaulted him like what assaulted you) sincerity of God Almighty.

Thanks to God Almighty the Air Force carried out a massive offensive operation with ten drones targeting the refineries Buqayq and Khurais affiliated to Aramco in the eastern region of Saudi Arabia this morning and the hit was accurate and direct, and this process was called “the second deterrence balance”.

This process comes within the framework of our legitimate and natural right to respond to the crimes of aggression and the ongoing siege on our country for five years.
This operation is one of the largest operations carried out by our forces in the depth of Saudi Arabia and came after a accurate intelligence operation and advance monitoring and cooperation of honorable and free mans within the Kingdom.

We promise the Saudi regime that our future operations will expand further and be more painful than ever as long as it continues its aggression and siege.

We affirm that our goals bank is expanding day by day and that there is no solution for the Saudi regime except to stop the aggression and siege on our country.

Issued by the Yemeni Armed Forces

In a large-scale operation, ten suicide unmanned aerial vehicles (UAVs) of the Houthis attacked early on September 14 two strategic oil facilities in the eastern Saudi areas of Buqayq and Khurais.

In an official statement, a spokesman for the Yemeni group said that the attack, dubbed Operation Deterrent Balance 2, was a response to the Saudi-led coalition siege and airstrikes on Yemen.

“Operation Deterrent Balance 2 came after a careful intelligence operation and prior monitoring and cooperation from honorable and free people within Saudi Arabia,” Brig. Gen. Yahya Sari said in the statement, warning that “future operations will expand further and be more painful.”

Buqayq and Khurais facilities, both run by Saudi Aramco, are located more than 1,100km away from Houthi-held areas in northwestern Yemen. The Yemeni group likely used its long-range Samad-3 UAVs in the attack.

Saudi Ministry of Interior acknowledged the attack in a statement, claiming that firefighter were able to put down fires caused by the suicide UAVs.

“Thank God, the two fires [in Buqayq and Khurais] were brought under control … The authorities have initiated an investigation,” the statement reads.

Working with @Obs_IL checking image sources as they arrive, one from @NASA shows the #Aramco strike area in #Saudi along with possible pressure relief flares in other refineries due to emergency shutdowns, more images will help asses the origin of these flares soon pic.twitter.com/MXKMExiQhq

Last month, the Houthis targeted the Shaybah super-giant oil field in southeastern Saudi Arabia in what was called Operation Deterrent Balance 1. The oil field was struck, but the damage was very limited.

These attacks demonstrate the Houthis’ ability to strike any strategic target anywhere inside Saudi Arabia. Facing this growing threat, the oil rich Kingdom may opt to de-escalate its war on Yemen, similar to what the UAE have done.